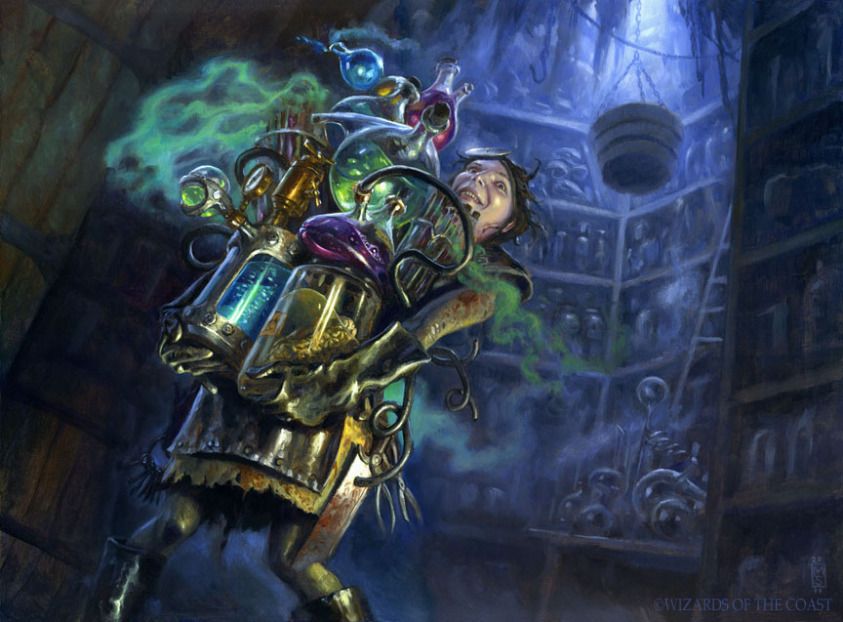 I hate material components in Dungeons and Dragons. Not because they’re bad, but because as a player and a DM, I am lazy to the point of my own detriment. Maybe many of my problems as a creator would be solved if I used material components more often. In fact the worst mistake I ever made as a person and as a player was getting mad at Starhelm for making materials hard to come by in Curse of Strahd. Which, if he is reading this, he now knows that I’m really sorry. Like, really sorry. Why would I have a change of heart? Sure, mundane materials are boring, but what if you incorporated more interesting materials than bat guano? What if by incorporating a displacer beast fang into an illusion spell did something for a spell you cast?

We’ll do ourselves a favor and skip the obvious. Resurrection material components, and other quest worthy components can go out the window. Sure, it’s a cool adventure seed to need to find a component to save someone from death. It works, and it doesn’t stop being fun depending on how you do it, but it is the obvious answer. Find X in order to Y is pretty much the go to D&D model and there is nothing wrong with it. We have a word for that- the McGuffin.

What I am talking about is, your party members have killed a beholder, it’s giant gross body lying at their feet, and the wizard says, “Can I take its eye stalks to use as a component for more powerful spells?” Before you say, “No, it doesn’t work like that,” you have every power to say, “Sure, we can work it out.” There are a number of ways you can do that. I personally would key each eye to a spell and if it is used as a material component that is consumed by the spell, maybe it offers a bonus to the spell DC, or the number of dice rolled for an effect like sleep, or damage dice.

If you’d like examples of more interesting components here are some examples to work off of:

Hell Hound’s Ashes– When you use this pouch of hell hound ashes as a material component when you cast a spell that deals fire damage. The ashes are consumed by the spell, and any creature affected by the spell takes an addition 2d6 fire damage and must succeed on a Wisdom saving throw or be frightened of you until the start of your next turn.

Pixie Dust Pouch– When you cast an enchantment spell, as part of the casting, you can throw a handful of pixie dust at the target of your spell, if it is within 10 feet of you. That creature has disadvantage on its saving throw against the spell. A pixie dust pouch can be used 1d4 times before it runs out.

Rust Monster Antennae– When you cast a spell that improves a weapon you are holding such as magic weapon and use a Rust Monster Antennae as a material component, whenever you deal damage, the weapon begins to corrode non-magical metals you touch with it.  If the object isn’t being worn or carried, the touch destroys a 1-foot cube of it. If the object is being worn or carried by a creature, the creature can make a Dexterity saving throw equal to your spell save DC to avoid this effect.
If the object touched is either metal armor or a metal shield being worn or carried, its takes a permanent and cumulative -1 penalty to the AC it offers. Armor reduced to an AC of 10 or a Shield that drops to a +0 bonus is destroyed.

You could definitely adapt so many components into your game, if you come up with any let me know in the comments down below or on Twitter!