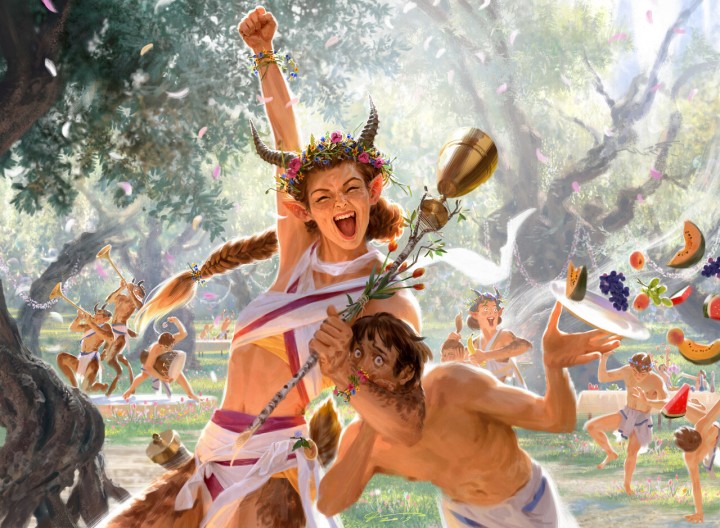 Today’s April Fool’s Day, but rather than deceit and misery, as there is enough of the that in the world, let’s party with a brand new bard college how bout? Today we bring you the College of Revelry! Now let’s get this party started!

Art: Gallia of the Endless Dance, Johannes Voss, Wizards of the Coast, 2020

A college of revelry bard is a performer who doesn’t incite chaos or war, but instead excitement and celebration. Merriment is their muse, food and drink their instrument, and the company of others their canvas. A bard of the college of revelry brings cheer wherever they go, and while they might be less refined than some bards, they are always a welcome distraction in bleak times and the darkest dungeons.

You know what makes a party, and mostly, that’s you. When you choose this bard college at 3rd level, you become proficient in Performance and Persuasion, with all gaming sets, and with brewer’s supplies.

Some people have nothing but unbridled enthusiasm, you are unbridled enthusiasm. Starting at 3rd level, you gain a bonus to initiative rolls equal to your Charisma modifier, you can’t be put to sleep magically, and you have advantage on saving throws made to avoid taking levels of exhaustion. A creature who has a Bardic Inspiration die from you also gains these benefits until they expend it.

A master of introductions and casual meetings, you are everyone’s favorite acquaintance. At 3rd level, you learn the friends cantrip, but it doesn’t count against your number of cantrips known. When you cast the cantrip, you can expend and roll a Bardic Inspiration die to prevent the creature from becoming hostile towards you. The spell’s duration is extended by a number of minutes equal to the number rolled on the Bardic Inspiration die.

Life of the Party

The spark you instill in others is invigorating for you to watch. Starting at 6th level, whenever a creature within 30 feet of you other than you rolls one of your Bardic Inspiration die, you and the creature’s speeds increase by 10 until the end of your next turn, and you both regain a number of hit points equal to the number rolled on the die.

There’s dumb luck, and then there are the otherwise impossible feats that you make possible. Beginning at 14th level, whenever you or another friendly creature have disadvantage on an ability check or attack roll, you can use your reaction to give the creature advantage on the roll instead. You can use this feature a number of times equal to your Charisma modifier.