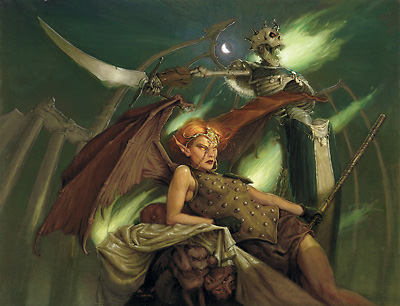 Today on the Mage College, we’re throwing a preview from our Spring title Fey and Wild: Calliope and Firiana’s Enchanted Enchiridion to Faerie. Along with Archdruid Tahina’s Sidhe race, and some game materials created by Head Curator Kannah, the Fey’ri, Faerun’s fey and fiend descended race will be making an appearance as well. If you are a fan of tieflings and elves, the Fey’ri are a wonderful mix of the two. We’ll be showcasing more from our future title later but for now, we give you the Fey’ri. Let us know what you think in the comments or on Twitter!

The Fey’ri are the result of a long history of the mixing of elven and demonic bloodlines. After centuries of this union of fey and abyssal heritage, the fey’ri have now emerged as their own race. Fey’ri look very much like elves with hints of their fiendish ancestry, the biggest clue being the bat-like wings they all sport. Aside from the obvious, Fey’ri may have crimson or obsidian colored skin, horns, fangs, tails, or other indications of the darkness they come from, though they do possess the ability to hide these features to better hide among other elven races when need be. Unlike tieflings that tend to lack their own communities, fey’ri live in complex settlements very much influenced by the prestigious culture of the sun elves mixed with the intrigue and chaos of the Abyss, only ever seeking to interact with sun elves of notable legacies outside their own community to expand this heritage for the sake of magical and political power.

Age. Fey’ri age at the same rate that elves do, physically maturing by their 20th year, but culturally becoming adults in their first century, and living as long as 700 years.

Alignment. The fiendish heritage of the fey’ri tends to steer them more towards evil, but some fey’ri do manage their darker nature. Thanks to both their elven and fiendish natures, they also tend to lean towards a more free and chaotic disposition.

Size. Fey’ri stand slightly taller than their elven counter parts ranging between 5 and a half feet, to 6 and half feet tall. Your size is Medium.

Speed. Your base walking speed is 30 feet.

Ancestral Defenses. You possess the resistances of both sides of your heritage, you have a number of resistances that develop as you grow in strength. You have advantage on saving throws against being charmed, and magic can’t put you to sleep. At 3rd level, you gain resistance to fire.

Winged. You have bat-like wings sprouting from your shoulder blades. You have a flying speed of 30 feet while you aren’t wearing heavy armor.

Elven Guise. As an action, you can magically assume the form of a normal elf. While in this form, you can’t benefit from your fly speed. Otherwise, the rest of your game statistics remain the same. Every time you assume this form, you adopt the same appearance, as this form appears to be distinctly unique to you.  Your clothing and other equipment don’t change in appearance, size, or shape to match your new form, and you revert to your natural form if you die.

Languages. You can speak, read, and write Common, Elven, and Abyssal.

Somewhere in your heritage, you have a powerful fiendish ancestor whose powers you now wield. You learn one sorcerer cantrip of your choice. You also learn the burning hands and darkness spells, each of which you can cast once without expending a spell slot. You regain the ability to cast these two spells in this way when you finish a long rest. Charisma is your spellcasting ability for all three spells.

In your mixed elven and fiendish bloodlines, there is a powerful fey ancestor whose innate magic you have awakened. You learn one druid cantrip of your choice. You also learn the faerie fire and misty step spells, each of which you can cast once without expending a spell slot. You regain the ability to cast these two spells in this way when you finish a long rest. Charisma is your spellcasting ability for all three spells.