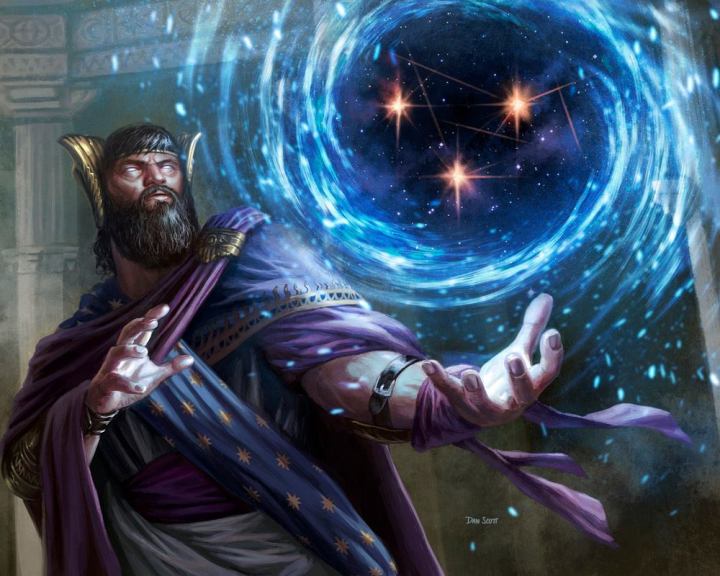 We’re full in swing with writing for Goldeneye’s Guide to Warlocks, so we thought we might share this Bard College we wrote this previous summer for our friend Kienna as a birthday present. Kienna quite graciously agreed to let us share this subclass with you guys because it is such a fun bard college! (Also she’s super nice like that.)

You can find Kienna over on her Twitter, where she is a super active member of the D&D and TTRPG community and a super positive force in it at that. Check out all the great stuff she’s involved with, in all the places. Let us know what you think of the subclass in the comments below or on  Twitter!

Bards who hail from the College of Astronomy are referred to by many as stargazers or astronomers. These bards tend not to sing songs of the material plane or tell stories of faraway lands, but instead they chronicle the movement of the stars. In doing so, they learn more about the natural world around them and the laws that govern it. By understanding these laws, through their magic, they can manipulate them. A stargazer’s inspiration may be less of an inspiring quip but a carefully laid plan founded in fact, science, and theory. Though these theories may be harder for some to understand, there is an intricate simplicity that underlies what these bards truly express- the beauty of the stars and the night’s sky.

At 3rd level, you become proficient in Nature, Survival, and with Navigator’s Tools.

At 3rd level, through magic drawn from the stars themselves, you bolster the power of your allies. When you deal damage to a creature, you can expend a use of your Bardic Inspiration to add your Charisma modifier to the damage. The next time one of your allies hits that creature with an attack before the start of your next turn, it deals an extra 2d6 force damage.
The force damage increases when you reach certain levels in this class, increasing to 3d6 at 5th level, 5d6 at 10th level, and 8d6 at 15th level.

Movement of the Heavens

Beginning at 6th level, your spells bend the world around you as the stars bend the cosmos. When you cast a spell of 3rd level or higher, you can choose to use one of the following:
Orbit. Each friendly creature within 30 feet of you can use its reaction to move up to its speed. This movement doesn’t provoke opportunity attacks.
Singularity. Each creature within 30 feet of you of your choice must make a Strength saving throw or be pulled 15 feet towards you.

Sway of the Stars

Once you cast reverse gravity this way, you can’t use it again until you finish a long rest.