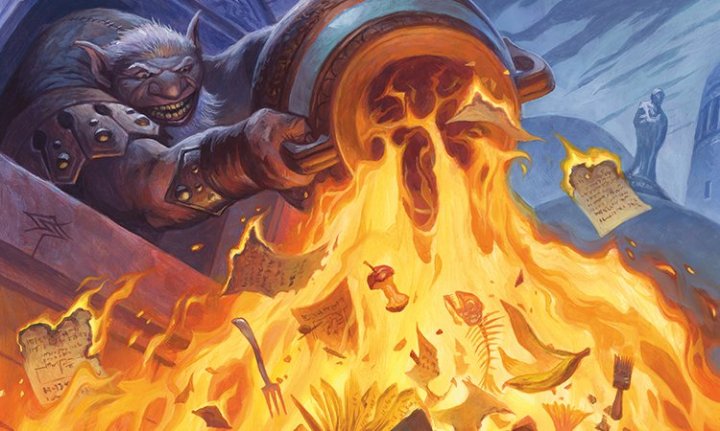 As we were discussing witches on Twitter, someone joked to me that one Commander Holly (@HollyConrad) , also known as Strix the Trash Witch on Dice, Camera, Action might be interested in a Trash Magic subclass. I said, if she wanted such a subclass, I’d make it. Her answer was a very emphatic yes. Soon after, I made this subclass. Let me know what you think in the comments below or on Twitter!

Art: Garbage Fire by Steve Prescott, Wizards of the Coast

However it was you became a scavenger of magic, your powers manifest in ways others would call “bizarre”. You excel at creating opportunity where there was none, and finding little strands of energy on everything around you. You can use these strands to exploit them to hamper your foes, as well as siphon magic from where there otherwise wouldn’t be. Other mages may call you a “Trash Witch”, but they are most assuredly envious of you and your resourcefulness.

Starting at 1st level, you may use any object without a gold value as an arcane focus for your sorcerer spells. Additionally you gain proficiency in Investigation and Survival.

Beginning at 1st level, you distort the space around you to wasteful proportions. When you cast a spell of 1st level or higher, the ground within 10 feet of you becomes difficult terrain for each creature of your choice until the start of your next turn.

Your spells vex and irk your foes, causing them to miss golden opportunities. Beginning at 1st level, when you hit a creature with a spell attack, that creature has disadvantage on opportunity attacks until the start of your next turn.

Waste Not, Want Not

As you cast spells, you have learned to skim magic energy from your most powerful spells for thrift’s sake. Starting at 6th level, when you use a metamagic as you cast spell of 2nd level or higher using a spell slot, you regain one expended spell slot. The slot you regain must be of a level lower than the spell you cast and can’t be higher than 5th level.

You siphon energy off spells that other spellcasters have wasted on you. Once you reach 14th level, when you succeed on a saving throw against a spell, you can use your reaction to regain sorcery points equal to the spell’s level.

You never let a good spell go to waste, especially one someone else was so gracious to throw away. Beginning at 18th level, when you successfully end a spell’s magic with dispel magic or counterspell, you can immediately spend sorcery points equal to the spell’s level to cast that spell, as long as it is a spell with a casting time of an action or bonus action. When you cast a spell this way, it counts as a sorcerer spell for you.