I am starting to wonder simply by including this image how much more I even need to bother to write. I didn’t want to overload myself on my first Star Wars themed article, but I think this may be one of the most important topics I haven’t covered and this is probably one that most GMs are in dire need of. There is a lot of taboo concerning the use of a DMPC. For those of you that are blissfully unfamiliar with the concept of a DMPC, a DMPC is a player character played by the DM while they are running the game. The obvious problem being as the DM, the DM knows entirely what is going on and what happens next in the narrative. In order to illustrate the do’s and do not’s of running a DMPC, we’ll look the narrative gravity of Obi-Wan Kenobi and Jar Jar Binks and we’ll assume that both these characters may have been DMPCs.

Jar Jar Binks, the worst DMPC in the Galaxy

Jar Jar is annoying. Jar Jar is rarely helpful. Jar Jar effectively ruins the galaxy. Whenever we would hold Jar Jar accountable for his actions, doing so without an ignited lightsaber in hand would be as Luke Skywalker would say, “Impossible”.  My extreme anti-Jar Jar bias aside, lets actually look at how Jar Jar interacts with the story and with the other characters. 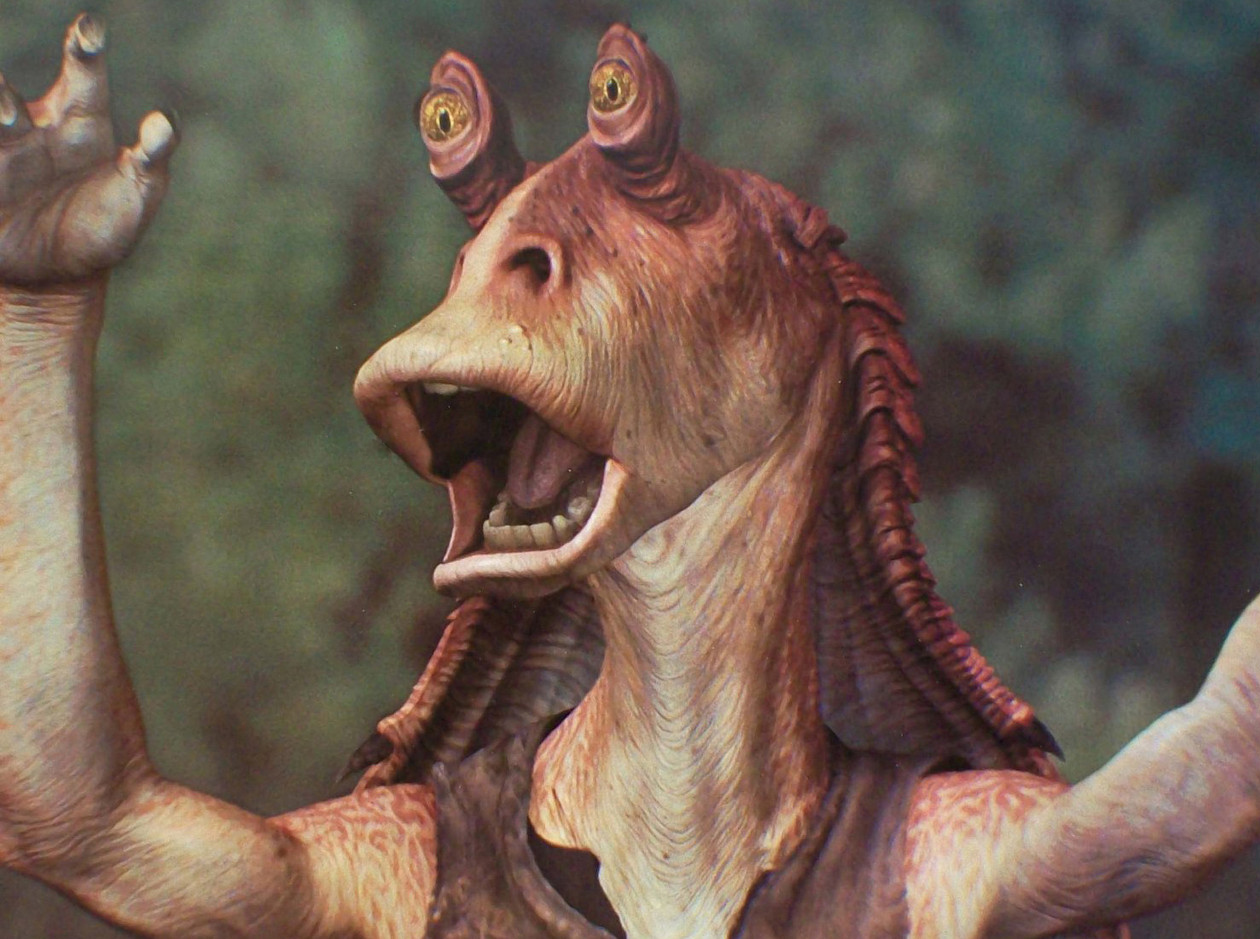 (It could have been over. Why wasn’t it over?)

When we first see Jar Jar, he is running for his life away from the Trade Federation Multi-Troop Transport. Qui-Gon’s player Liam, makes the decision to save Jar Jar. A decision he and the rest of the people who enjoy this game would come to regret. Keep that in mind for later. Jar Jar then insists to Obi-Wan and Qui-Gon that he must come with them. Liam and Ewan (Obi-Wan’s player) don’t really want to take Jar Jar with them, but the GM, George, insists. So in and out of character, the heroes take this DMPC with them. As the story goes on, their frustration intensifies. Jar Jar is constantly in the way, distracting, and at best, unnecessary. George used him to help the heroes find the Gungan city but once their friend Natalie joins with her character, Padme, Jar Jar begins to fall into the background. Natalie is shy at first and she doesn’t really engage with the other characters until their ship breaking down as they escape Naboo,  and a younger player named Jake, who is playing a character named Anakin who is allegedly “the chosen one” or something joins the team. Natalie then begins to play Padme like she actually has a pretty prominent role despite her being a hand maiden. However, George just can’t seem to find a good place to ditch Jar Jar.

Now that the party is no longer just two people, Jar Jar is now only used as a joke. George tells a good story, but he’s just not that funny. He also caters to the desires of the players stretching the room for Jar Jar even thinner: Natalie is interested in political roleplaying, Jake wants to pilot stuff and fly around, and Liam and Ewan just want to hit stuff and be cool. Jar Jar has no goals. He was written in as a plot device, George liked him enough to keep him around, but now the players have to pretend that this character is there at all. (CGI joke) However, when the players go back to Naboo, Jar Jar is useful for the same reason again, being the connection to the Gungans. Once the good guys meet up with the Gungans again and they join forces, Jar Jar is again rendered useless. The heroes plan an attack on all of the bad guys’ main fronts and George says, “Hey wait, what about the droid army? How will you guys deal with that?”
Natalie, who just revealed that her character is actually Naboo’s elected queen, says, “The Gungans can do this.” Natalie is a brilliant young lady and realizes that seeing as George promoted Jar Jar to General because “something something, Boss Nass, Gungans” Jar Jar will not be a concern because he’ll have to go fight the droids. Hopefully, George will be smart enough to let Jar Jar die in battle as a hero.

Nope, It Gets Worse

The players immediately regret this decision to have their respective infiltration, dog fight, and lightsaber duel scenes be interrupted by  “hilarious” (obnoxious) play by play of Jar Jar rolling poorly but still succeeding because he’s a “fun character” and George is trying desperately to get the players to like him by subjecting them to his rule breaking, unlikely success. He erroneously thinks that if the players see Jar Jar doing well, that the players will like him. This is an incorrect assumption on George’s part. Most sane players are actually annoyed further. The players finish this arc of the story, Qui-Gon dies, but there is a hook for the next story arc. Some players don’t feel like playing again, and others are willing to stick around, politely informing George that less Jar Jar would be appreciated. Natalie and Ewan stick around to play, and a new guy, Hayden, picks up the role of Anakin because they need the “Chosen One”. The story picks up ten years later in game, some stuff happens, and they see way less of Jar Jar and it is awesome. Hayden plays Anakin like a whiny brat, but it gives Ewan a chance to play the role of the wise teacher. Natalie and Hayden roleplay a very weird romance that makes everyone, even them, uncomfortable. At least there is still no Jar Jar. He said hi to Anakin once, simply because George wanted Hayden to see Jar Jar. Hayden acted like he was barely there. (It’s another CGI joke.)

Stuff happens in the plot, but George is unable to resist the temptation of not using Jar Jar. He has the stupid Gungan, who is apparently someone in political power now, (for reasons unknown to anyone) give unquestionable power to an NPC that the player characters, except for Anakin, don’t trust. In fact, they are pretty sure he’s the bad guy. The character’s first name is Sheev. His full name is Sheev Palpatine. That is not a good guy name!

That moment is the final straw. The players are baffled by how a sudden, ninja-stealth-attack of bad GMing takes place in a single thirty seconds. They don’t have a chance to stop him, and he rationales, “Hey, it’s the thing Jar Jar would do.” However, where George is wrong, is that no one gives a damn what Jar Jar would do. They don’t want Jar Jar to be anywhere near the story. Most people are upset that Jar Jar wasn’t run over by the MTT back on Naboo ten years prior. After this story arc, Natalie says, “George, the next time Jar Jar shows up, my character better be dead,” and George keeps his word. Jar Jar isn’t seen again until Padme dies, and is never seen again after. 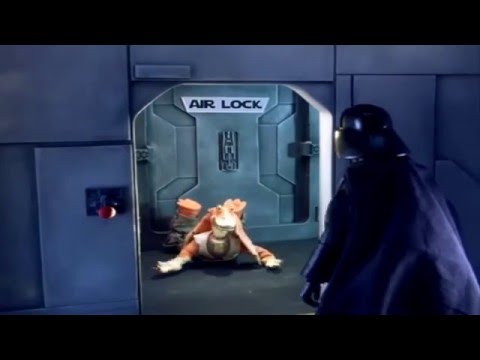 Though, I don’t think Jar Jar would have been the DMPC if Star Wars was a TRPG. Not just because Jar Jar is about as fun as being a related to a Skywalker, but the saga is not undone by Jar Jar. In fact, if we want to assume that we’re looking at the whole picture in which we might have a reoccurring DMPC, our focus shifts to Obi-Wan Kenobi. Obi-Wan is a great DMPC. I will spare you the six film recap, but the ingredients are there. In Episode I alone, when Obi-Wan  he speaks his mind, offering clues to the plot, Qui-Gon can and does often ignore him. However, in line with good DMPC playing, Obi-Wan appeals to the character and player, by apologizing for getting in the way. Qui-Gon’s player takes well to it and says (virtually), “Ya know, you’re not too bad kid.” The GM even tries to let Qui-Gon have the spotlight when fighting the “boss”, but sadly Qui-Gon is defeated so the DMPC has to win, but doesn’t do so easily for Qui-Gon’s looking like a badass. With Qui-Gon’s death, Obi-Wan becomes the master, and this role serves him well as a character. With some characters, like Anakin, this creates an interesting dramatic tension that even the final duel between Obi-Wan and Anakin doesn’t end Anakin’s story. It ends on what could very well be an end, but Anakin’s story doesn’t end there, it only evolves.

The GM from there can leave an impression on the new players: Mark, Harrison, Carrie, Peter, Anthony, and Kenny by using Obi-Wan. Obi-Wan may know plenty about the bigger picture but he doesn’t let on because that shifts the narrative from these new characters back on to him. So as Luke watches Obi-Wan get struck down by Darth Vader, he’s inspired because of the connection he made to the character. Of course, the story takes a small pivot leaving Obi-Wan to primarily inspire Luke, but the rest of the new characters form such an amazing cast that they don’t need a DMPC. It sure as hell isn’t Lando. At this point, Obi-Wan functions as more of a cool mentor NPC for Luke to interact with and learn from when the time is right and the story is ready for it.

Hopefully this helps but if you need clear directive as how to play an DMPC, I present to you:

I will do what I must. The DMPC helps the players unless it is absolutely contrary to the character’s beliefs and the integrity of the game. All else, the DMPC plays their role.

There’s no such thing as luck. DMPCs are still part of your control, so if something makes sense to keep the DMPC indisposed, or more willing to let the player characters try to succeed, then make it so.

What I told you was true, from a certain point of view. The DMPC does not need to divulge all the GM’s secrets, and can allow players to be ready to know the truth of a matter at hand in a way that fits their alliance.

If you strike me down, I shall become more powerful than you can possibly imagine. The DMPC can serve an important role, but if the players truly appreciate the character, they will fight to keep them. If struck down, it will only inspire them.

I have the high ground… Don’t try it! The DMPC can warn players when they will make mistakes, and be the voice of reason, but when the chips are down, they will “do what they must”.

That’s no moon! The DMPC can share information he would know, or be willing to detect. In fact, use the DMPC to help describe the world by their words and actions. The DMPC can even help set the tone for a scene.

These aren’t the droids you’re looking for. The DMPC can try to keep the PCs on task, but should be subtle about it. No more overt than a Jedi mind trick.

That’s all for now. If you liked this article, feel free to comment and share. You can find me on Twitter @Archmage Derek. More Star Wars related content will be released up to and a bit after the premiere of The Last Jedi. See you soon and may the Force be with you, always.